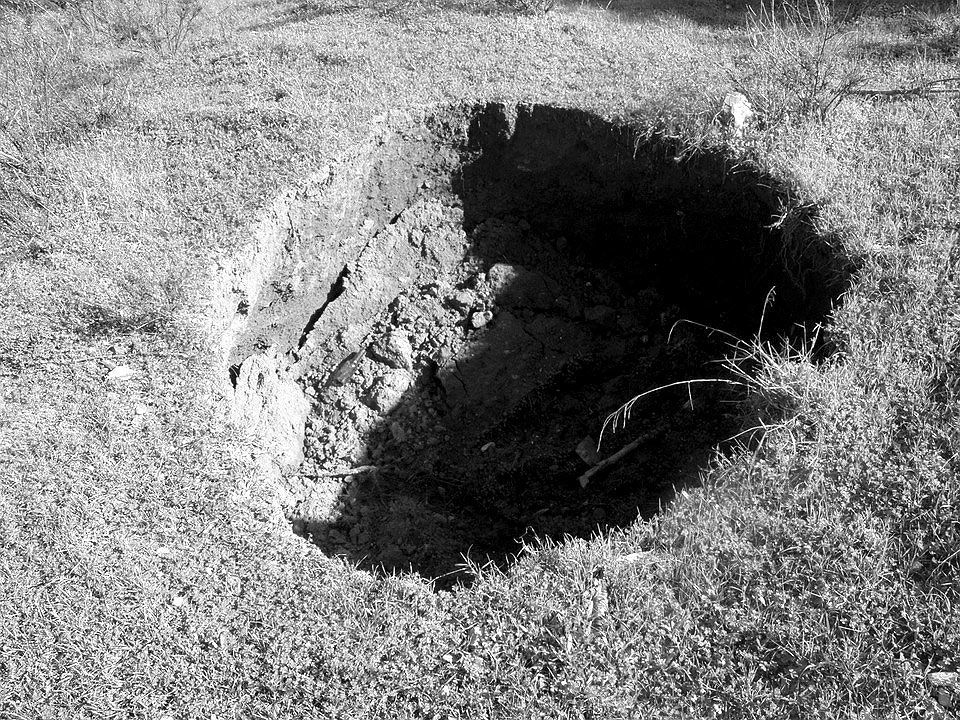 Water erosion is the responsible for most sinkholes

Underground channel associated to a sinkhole

Sinkholes can be natural or man–made. Natural sinkholes occur due to erosion or underground water. They start developing long time before it appears.

As the water seeps in between soils and rocks, making its way down to the ground water reservoirs it slowly erodes nearby formations. Sometimes the flow of water increases to a point when it washes away the underground structure of the land. And when the structure becomes too weak to support the surface of the earth, it collapses and opens up a hole. This is how sinkholes are formed.

Humans are also responsible for the formation of sinkholes. Activities like drilling, mining, construction, broken water or drainpipes, improperly compacted soil after excavation work or even heavy traffic can result in small to large sinkholes. Water from a broken pipe can penetrate through mud and rocks and erode the ground underneath and cause sinkholes. Sometimes, heavy weight on soft soil can result in collapse of ground, resulting in a sinkhole. Sinkholes can also form when the land surface is changed.

Areas that have a bedrock composed by carbonate rocks or salt deposits are most susceptible to erosion and the formation of such holes. These rocks tend to erode as acidic water passes through them.

Detection, forecasting, early warning, and effective monitoring are key aspects for the delimitation of sinkhole-prone areas. The integration of different geophysical methods including 2D- and 3D-electrical resistivity tomography, microgravity and seismic measurements.

Geophysical methods are recognized as the best tools to identify and map sinkholes from the surface. Natural cavities, in fact, can be filled with air, water, or collapsed/unconsolidated material, resulting in variations in the ground physical properties and therefore providing fairly distinct geophysical contrasts, which may be detected. Moreover, since the rock surrounding the cavity is often disturbed, the associated fracturing may extend up to two or more diameters away from the cavity.